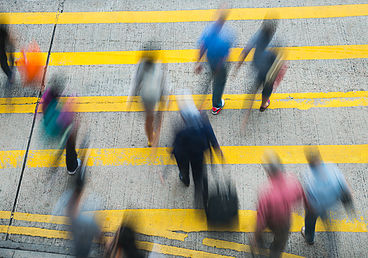 My senior year of high school, I was talking to a school counselor about an experience I had earlier that year with another classmate. As I finished my explanation, he told me that what I had experienced was emotional trauma. I can’t recall what I said to him, but I remember feeling surprised. No one had ever framed my story that way. That word, “trauma,” framed the experience in a way that allowed me to understand the weight of it, that it wasn’t just “high school girl drama,” as I had been told it was by my peers and by the media. Through this processing with the counselor, I was able to realize that my reaction to this emotional trauma wasn’t overreacting but a complicated interplay of psychological and physiological reactions that are common for trauma survivors. It became clear to me, just in that simple reframing, that trauma took on many forms and that it affected much more of my life than I had ever been able to name. In the following years in college, I was able to expand my understanding of my own trauma and the ways that the church inflicted spiritual, psychological and emotional trauma on me. These realizations were not wounding in and of themselves, but the repression of all the trauma I had experienced up until that point was beginning to unravel. At times this felt like a previously broken bone responding to a change in atmospheric pressure, but more constant, more persistent.

The Oxford English Dictionary defines trauma as “a psychic injury, esp. one caused by emotional shock, the memory of which is repressed and remains unhealed; an internal injury, esp. to the brain, which may result in a behavioural disorder of organic origin.” The use of trauma in this sense was first recorded in an 1894 edition of Psychological Review. The Substance Abuse and Mental Health Services Administration of the U.S. defines trauma as, “Experiences that cause intense physical and psychological stress reactions. It can refer to a single event, multiple events, or a set of circumstances that is experienced by an individual as physical and emotionally harmful or threatening and that has lasting adverse effects on the individual’s physical, social, emotional or spiritual well-being.” With these definitions in mind, it becomes clear that trauma encompasses a wide variety of experiences, including psychological and emotional harm we may find difficult to name.

This month I attended a workshop titled “Restoring Power: Trauma and Resilience for Survivors.” I found the event on Facebook and was drawn to the title, so I registered without knowing much about what I was going to experience. The workshop was facilitated by artist Ricardo Levins Morales and Certified Acupressurist Molly Glasgow. Ricardo and Molly led a group of about twenty people in discussions, exploring different acupressure points that relate to trauma (in general but also specifically to trauma experienced in social justice organizing) and considering different ways of understanding trauma.

Throughout and after the workshop, I was reminded of the urgency for justice present in my own body. While some of that urgency is created out of empathy, compassion and respect for other people, it is also driven by trauma:  my own trauma and the collective trauma experienced by my communities and the communities that surround me. When we understand injustice as a traumatic experience, justice becomes even more important. Racism, sexism, misogyny, heterosexism/homophobia, cissexism/transphobia, ableism and other forms of oppression are traumatic, they surpass our abilities to “cope or integrate the emotions involved with that experience.”

This is further cemented by the intergenerational transmission of trauma. More and more studies have been released that show evidence for this transmission. A report published by the National Aboriginal Health Organization in Canada states, “There is now considerable evidence that the effects of trauma experiences are often transmitted across generations, affecting the children and grandchildren of those that were initially victimized.” Molly and Ricardo spoke about a few of these studies and this is where I felt the most urgency. The effects of trauma don’t begin and end with an individual, but are carried on long past our own lives. So when we consider what progress we are making toward justice, we must acknowledge that the effects of injustice will still be present in future generations. If we don’t work toward justice now, injustice and trauma will continue to pervade the lives of the grandchildren of our grandchildren.

Molly and Ricardo also emphasized that the body is the site where we experience trauma. In addition to this, the body is the way we know everything we know. As my high school counselor processed the emotional trauma I had experienced with me, I can still remember the tension I felt in my neck as he spoke, the warmness of my throat, the slow tears my eyes produced. My body knew the weight of what I had experienced, I just needed to listen to it. The facilitators also explored the ways the body knows how to heal itself. Trauma separates us from our bodies. As I recall the trauma I experienced in Kansas City at the biennial MCUSA convention, I remember a sort of psychic removal of myself from my body. During the silent witness with Pink Menno, as I watched the delegates pass through us, I was body-checked, rammed into, and touched without my consent over and over again in the course of the two hours I stood there. It wasn’t until after the witness was over that someone said to me, “Are you okay? You were body-checked a lot,” that I realized what had happened.

After I was able to return to my body, I recalled other experiences of trauma where I felt as though I was living outside of myself. In the church I grew up in, this separation of body from spirit was constant, and even worse, it was elevated as a goal of Christian spirituality. In this, I was removed from self-knowledge. This injustice was further compounded by the socialization of shame and silence. I was robbed of experiencing my body in its truest nature and was taught to stay silent and feel guilty about it.

As I am learning to come home to body, I’ve experienced a troubling sort of catharsis. While I am reveling in being able to live in my body, to listen to it, to nurture it, I am also aware of what trauma has done to me, physically and emotionally. I revisit my trauma and locate where in my body it has wounded me. My body knows its history, even if I am unable to name it. As I listen to and ground myself in my body, I am able to slowly heal those wounds. During the workshop, Ricardo discussed that this return must be accompanied by a reframing of the trauma. Where I was once ashamed about the emotional trauma I experienced, I am learning to reframe it in a way that is liberating: it wasn’t my fault that I experienced this, I did what I was capable of doing to cope with it.

We can also extend this beyond our own individual experiences of trauma to collective trauma. I’ll use the example of homophobia. Gay, lesbian, bisexual, pansexual and non-heterosexual people have experienced the trauma of homophobia, but despite what shame tells us (that we have colluded with our own oppression, as Ricardo put it), we have not inflicted this upon ourselves. As we have understood this basic truth about ourselves and returned to our bodies, we have sought and continue to seek justice. While each generation has inherited the trauma of those who came before, we also inherit their resilience and resistance.

Trauma and oppression are made possible through the institutionalized notion that bodies must be denigrated in order to elevate the spirit. Historically, the marginalized have been associated with the body while the privileged are associated with the mind (especially with logic and reason). We live in social environments that are created and sustained where the marginalized are thought only to be bodies, and then the body is vilified and commodified.

There is, however, an important distinction to make here: privilege, the presence or the absence of it, creates a markedly different experience of this split. Oppression marks the marginalized in a way that those with privilege are unmarked. This creates a complicated web, where we are marked in some ways and unmarked in others. As I am learning to unite my body and mind, I am becoming aware of the ways trauma keeps me from knowing my most authentic self. I am also becoming aware of the ways privilege grants me access, simply based on one facet of my body (such as my whiteness). As I commit to this process, I am able to name my trauma and marginalization and the way they have denied basic truths about my value and worth. I am also able to name my privilege and how I experience it as access, as denying the humanity of those who don’t share this characteristic with me. This naming is part of the process of liberation. As I name, rename and honor the truths injustice and oppression have taken away from me, I honor the truths of others, those which my privilege and socialization have kept from me.

Two years ago I broke my elbow. Occasionally, before it rains or snows, it gets a little sore, or I have difficulty straightening my arm out. As annoying as it is sometimes, it reminds me of the ways the bone healed itself, the resilience my body inherently has. As I have revisited my trauma, in whatever ways I am brought back to it, I am reminded of the ways I am healing. This is not to say it isn’t painful, or that I don’t occasionally wish I could forget it all, but that it is a reminder that I am still here; that as I come home to my body, I am able to name and know myself even as the trauma has begged me not to.

For more information about Restoring Power: Trauma and Resilience for Organizers, visit their Facebook page.